The annual event is organised by the North & Western Lancashire Chamber of Commerce’s Preston Business Improvement District (BID), with the intent of bringing thousands of party goers into the city centre to stimulate the night-time economy & celebrate the coveted purple flag accreditation.

This year’s sell-out event has surpassed all previous years in terms of attendance, economic impact and customer feedback.

The planning and execution of the event has been led by Preston BID, alongside a careful selection of expert providers from the Preston and Central Lancashire area.

Invoke saw three of its key clients involved in the event. Preston BID as the event organiser, Get Staffed providing the bar and hospitality team, and UK Media & Events as the event management and production agency.

“It’s one of those rare occasions where we get to collaborate with multiple key clients on the same project. It was a great experience to work with like-minded people, each an expert in their own field, to put together an excellent event that has driven thousands of people into the city centre. Our involvement and that of three key clients makes this a quadruple win for us and extremely satisfying.”

“The main reason we moved Invoke Media to Preston from Manchester was to support and be a part of the development & investment that is happening in our city, my hometown. It’s events like this, local collaboration and hard-working organisations like Preston BID that are driving growth and making us a true contender in the region, we can’t wait until next year” 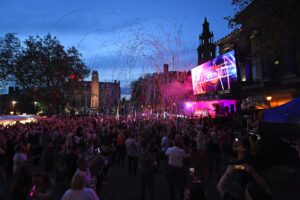 “Preston BID worked with a close-knit team of local trusted businesses, to plan and execute our most successful event to date. By working with Preston businesses we’ve not only ensured a sell-out, well-run event; we’ve fed back into the local economy and supported chamber members.“

Invoke Media is a marketing agency based at Preston’s Cotton Court Business Centre. Incorporated as a limited company in 2013 and operating from Manchester city centre, it returned to Preston in summer of 2018 to support the development of the city and local area.

Working with local success stories such as the San Marco Group, GetStaffed, Baluga Bar & Club, Cotton Court Business Centre and the North & Western Lancashire Chamber of Commerce, they have truly ingrained themselves in the local economy and the success stories it creates.